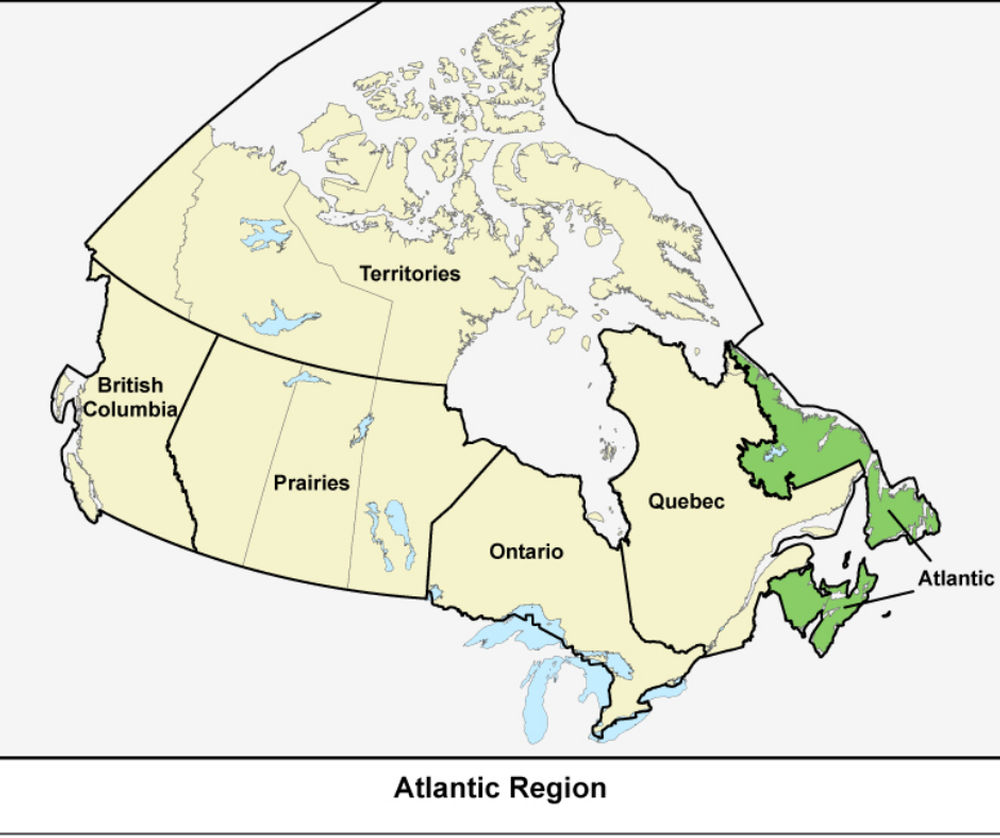 The region known as Atlantic Canada is comprised of New Brunswick, Nova Scotia, Prince Edward Island, and Newfoundland and Labrador. These four provinces have a distinctly vibrant coastal vibe, boasting beautiful white sand beaches, scenic coastal drives, and an undeniably laidback attitude, even in the cities.

Want to Immigrate to Atlantic Canada? Yes, you CAN DO it!

Newfoundland and Labrador lie to the north of the other three Atlantic provinces, with Quebec to its west. New Brunswick is bordered by Quebec and the US state of Maine to the west, with Nova Scotia and Prince Edward Island clustered around the south to southeast. Halifax, Nova Scotia is the largest city in the region and home to some incredible historical sites. You’ll find the oldest functioning lighthouse and salt-water passenger ferry service in North America in the humble city, as well as the longest continuously running farmers’ market[1]. St. John’s, Charlottetown, Fredericton, Moncton and Saint John are the other large cities in the Atlantic Region.

The Atlantic Provinces are all bordered by the Atlantic Ocean to the East. The proximity to the ocean means the Atlantic provinces enjoy mild weather compared to the exceptionally hot summers or cold winters experienced in central Canada. Average temperatures across the region in winter drop only as low as –8°C, while summer temperatures don’t tend to go above 30°C[2].

The nearby Atlantic Ocean supplies residents and tourists with treasure trove of rich, delicious seafood. Lobster from the area is world famous, while the strong agricultural industry and emerging wine scene hold immense promise for foodies.  Coupled with the stunning scenery and exceptional access to wildlife, whale and seal spotting and puffin tours are exceptionally popular, the Atlantic provinces attract a steady flow of tourists. Pre-COVID, the tourism industry brought in more than $4.5 billion annually to Atlantic Canada, while providing 57,000 inhabitants with full-time work[3].

While the economic drivers differ between the provinces, the region is focused on delivering faster scale-up of businesses operating in emerging industries, like cybersecurity, digital technology and green technologies. Opportunities within existing industries, like aerospace, bioscience, as well as oil and gas, are also being expanded[4]. Real estate, wholesale and retail trade, construction, manufacturing, education, public administration, and health care and social assistance are further economic drivers in the region[5].

To qualify for the Atlantic International Graduate Program, you must have received your education at a publicly funded institution in an Atlantic province while living in the province for at least 16 months in the 2 years before getting your credential. You must also demonstrate proficiency in an official language – either French or English – and show that you can support yourself and your family when you come to Canada.

For the High-Skilled Program, you must have worked at least 1,560 hours (or 30 hours per week for one year), in a highly skilled occupation within the past 3 years. Highly skilled occupations are those that are classed either skill type 0, A or B under the National Occupational Classification. Additionally, you must have a Canadian secondary or post-secondary education or a foreign degree, diploma or certificate that has been assessed as equivalent to a Canadian credential. Highly skilled workers must also demonstrate proof of adequate funds and proficiency in English or French.

Requirements for the Atlantic Intermediate-Skilled Program are identical to those of the High-Skilled Program save for the job classification requirements. For this program, applicants may have work experience in a job classed as a skill level C role under the National Occupational Classification. There are also designated programs for registered nurses and licensed practical nurses willing to work as a nurse’s aide or home support worker in Atlantic Canada.

All of these programs require the applicant to have a job offer from an Atlantic employer.

Qualified applicants are also able to apply under the Federal Express Entry program for permanent residence. If successful, express entrants are permitted to live and work in the Atlantic provinces permanently.

Want to immigrate to Atlantic Canada? Yes, you CAN DO it!